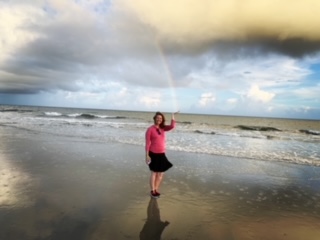 This is one of the biggest stories of my life.

My name is Larissa and I live with my husband, Chris, and children, Nathaniel and Lana in Hickory. We have lived in North Carolina since 2008. We previously lived in Florida for a few years, North Carolina before that and are both originally from West Virginia.

The first time a transplant was ever mentioned to me was when I was around 16 or 17 years old. I had to start taking a low dose blood pressure pill to help protect my kidneys after being diagnosed with type one diabetes at 18 months old. I don’t recall exactly what or how that conversation came about. I just remember the doctor saying that I’d probably have to have a  kidney transplant at some point. “Diabetes really takes a toll on your kidneys,” he said.

It took a chain of events to get me to become a candidate for a transplant. First of all, life with diabetes is not easy. It’s not a silent disease to those that have it. The fact that no one can see a disease that is always tearing at your body, is equally difficult. Some of the many unsolicited comments over the years have been: “You don’t look sick.” “You aren’t fat.” “My  grandmother’s cousin’s boyfriend had that bad kind of diabetes. He had to get his feet cut off!” “I bet you wouldn’t need to take insulin if you only ate lettuce.”

In 2014, I was diagnosed with mild diabetic gastroparesis. This means my stomach is paralyzed. Before a meal, typically a diabetic is supposed to check their blood sugar, count the carbs they’re going to eat, take the insulin to cover the food, and any high blood sugar that they might be experiencing at the time. So, on top of this, I had to learn to try to predict when my stomach would actually process the food.

I did some research and many, many times I’d eat the same foods for a few days in a row and there was never consistency as to how and when my body would process those same foods on any given day. There were many times that my blood sugar levels would go far too high which could potentially cause more complications. There were also many times that my blood levels would drop so low that it was very scary. It dropped dramatically and suddenly once while I was driving with my two children and one of their friends in the car. I pulled over on the side of the road and just prayed that I didn’t pass out.  Thankfully, I had movies on my phone and the three kids watched a cartoon while I fought for my life with Sprite.

That was a big wake-up call for me and I began to pray for something to change. It wasn’t long after that, that I saw an ad from the University of Indiana about a woman who had had a pancreas transplant. I was so surprised! I had no idea that a pancreas transplant was even possible. I began researching like crazy and that February at my routine endocrinologist appointment, I asked if a pancreas transplant was a possibility for me. My doctor said that during her career she had two other people who had had pancreas transplants and they are (or were at least at the time) doing so well that they weren’t her patients anymore. She agreed to refer me to Wake Forest, but I preferred Duke because I was already a patient there.

During my transplant journey, I relied on my faith in God and Jesus. I also made myself something to hold onto (to touch); a battle book. In it were notes that people had written me with encouraging words, scriptures, nice sayings, song lyrics, and even the paperwork, labs and various information I received from Duke. One of the most encouraging songs during the really difficult times was “Trust in You” by Lauren Daigle. I listened to her album How Can It Be all the time!

My two children were quite young and not having a family that lived close by, I had to come up with a plan for them. Thankfully, a family friend took them in during my hospital stay. I had many, many calls for potential matches. However, and obviously, they didn’t happen for one reason or another.

In November 2015, I received a call from Duke, drove the two hours there, had all the labs done, got ready, waited the whole night hooked up to an IV and heart monitor expecting to have a transplant just to be told the following morning that the pancreas was not transplantable. I was…heartbroken. I cried as I left, I cried when I got in the car, I cried myself to sleep on the two-hour drive home. But then, I realized that that particular pancreas just wasn’t for me. Three months later everything fell into place and I was able to get the pancreas that I was supposed to get. At a check-up post-surgery, I specifically remember the surgeon saying, “It’s snug as a bug; like it was always a part of you!” It’s amazing to “always be a part” of someone you’ve never met.

My life has changed in many ways. I do still check my blood sugars occasionally, but  no longer 10+/- times a day like pre-transplant. In some ways, I do more (I take approximately 30 pills a day, check my vitals a few times a week, get lab work done more often) and in other ways, I have less responsibility (not as strict on carb counting, checking blood sugar levels). My quality of life has greatly improved; I have more energy to homeschool my two children and keep up with my family.

A few amazing facts about my surgery are: I had a pancreas-only transplant (not as common as a  kidney-pancreas), my surgery room smelled like a high school science lab, and I was able to see the organ before I was put under anesthesia--it was one of the most beautiful things I’ve ever seen! It hurt like a “10” when I woke up from surgery, but I’d still do it over again. And last, but not least, the only thing that I know about my donor is that they were a selfless and caring individual - and, that’s all I need to know.

The transplant process is more emotional than physical. Every single person has a  different perspective, process, and possibilities. You will cry…a lot. You will wonder if it will be worth it. You will worry. You will learn a lot. You will cry some more. In the end, though, it will be just what you needed for your mental and physical health. It will give you a new lease;  a new thought process, a new responsibility, and a new outlook and it will be glorious…no matter what!