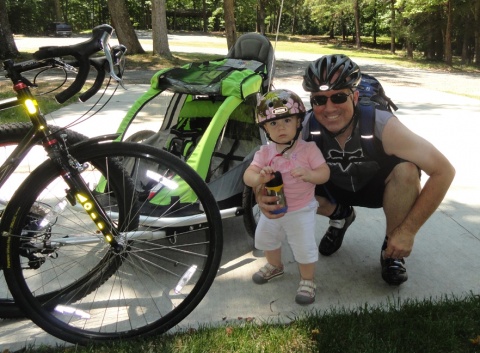 After living with the diagnosis of Polycystic Kidney Disease for over 15 years, Robert Newton's health declined. Soon, a transplant became a top priority for Danielle, his wife, and him. He received that gift on October 24, 2010 at Duke University Hospital, just in time for the birth of his first daughter, Eliza! Robert is part of Team Carolinas at the Transplant Games of America 2012 in Grand Rapids, Michigan.

How did you end up a kidney recipient?

When I was 20 years old (August 1991), I found out that I had PKD (Polycystic Kidney Disease). It was a real downer for me to find that out, because I was in the best shape of my life at that point. I was playing community college football and I had to quit after finding out about my PKD. Three months after that, my team ended up winning the National Championship. I was so bummed that I didn’t get to be a part of that.

My condition worsened slowly until about 2006, when my kidneys and overall health started to rapidly decline. I was put on the national waiting list in summer of 2007. I began dialysis in January 2008. I kept working full-time all throughout and tried to exercise as much as my body would allow. Dialysis is tough -- it’s like running your body through a ringer. When it’s over, sometimes I would just want to sleep for four hours! In 2009, I had a double nephrectomy, (removal of kidneys) and my overall health condition became much worse. My blood pressure was so low that I had to switch to an office/desk job at my work. Even in the midst of that, I did a 5K running race that raised money for a local kidney center, and I won 1st place in the dialysis division!

I received my kidney transplant on October 24, 2010. My kidney began working almost immediately. I feel like a brand new person!

I will compete in the swimming events: 500, 100, 50 (Freestyle), 100 & 50 (Backstroke), and the 50 Breaststroke. I’m also competing in the bicycle road race and time trial; the 1-mile and half-mile running events on the track; and the softball throw field event. My wife, daughter and I will be walking the 5K public event at the games, too.

I have done some training, but I feel that it’s not enough to be seriously competitive. But I’ve been doing a little bit of bicycle commuting to work, some riding my bike on a trainer, and I’ve also ran at our local YMCA to stay fit. Just last weekend, I raced in a time trial bike race – the North Carolina State Championships, where it wasn’t about how I finished compared to the other cyclists in the field, but it was more about seeing how much more fit and able I am since getting my transplant. I could’ve never finished in the time that I did when I was on dialysis.

What motivates you to compete in the transplant games?

I want to show others how far I’ve come since my transplant, compared to how I was during my struggles with kidney failure.

What has your transplant allowed you to do with your life that you previously thought unlikely or impossible?

I’m a father now, and I have so much more energy to keep up with my daughter and be a great dad to her. I’m currently chasing her around the house and getting down on the floor to play with her a lot. I can’t imagine doing this kind of Daddy stuff when I was at my sickest. So I’m happy about that.

How do you support organ donation and transplantation in your community?

I tell others about my story all the time. I work in a retail setting where I interact with new people coming into my store all the time. As I interact with them, my story of PKD, dialysis, and transplant comes out. I tell them that being an organ donor is the greatest gift you can pass on to another person in need.