Reclaiming My Identity With a New Heart 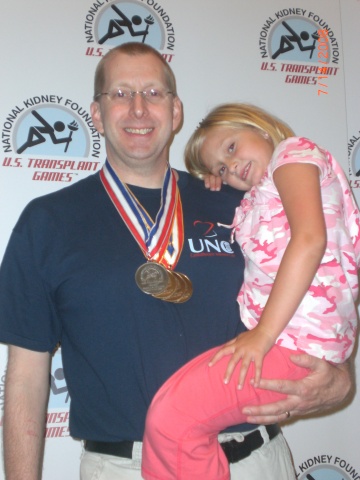 Brian Barndt identifies himself as an athlete. But, at the tender age of 22, heart disease put that identity in question. After struggling with the ups and downs of cardiomyopathy for 15 years, Brian received his new heart on July 25, 2005 at Duke University Hospital. Brian and his wife Caroline have two daughters: Laura and Rachel and one furrier member: Henry, the family dog. With the support of family and friends, Brian has reclaimed his identity as an athlete and many others along his road of recovery. He is part of Team Carolinas for the Transplant Games of America 2012 taking place in Grand Rapids, Michigan.

What was your journey to receiving a transplant?

In 1990, I suffered congestive heart failure and was diagnosed with a heart disease called cardiomyopathy, accompanied by atrial fibrillation.  I was 22 years old, afraid, and angry that I was facing the possibility of a heart transplant.  Why did a virus attack my heart?  Was I really so sick I was unable to work out in the gym?  Could I return to college and graduate?  Would my parents lose their only child?

For the next ten years, life had its limits, yet it was full.  In 2001, my deteriorating condition led to surgery for a cardiac defibrillator.  Two years later, I underwent open heart surgery to repair a leaky mitral valve.  I was very sick, and the effects of my worsening illness were obvious in the life of my family and friends, in their worry, tears and prayers for healing.

Seven weeks after being listed for a heart transplant on June 9, 2005, I received the long awaited call.  Following transplant surgery, there was more color in my face than in the past few years.  “His lips are pink” became a popular phrase!  Not only was I able to take a full breath again, I could sleep without the fear of being awakened by the shocks of my defibrillator.  I was given new life, new hope and a new purpose.

What other Transplant Games have you competed in?

I participated in 2006 U.S. Transplant Games in Louisville, KY, earning four gold medals in swimming. Then, I competed in 2008 in Pittsburgh, PA, winning three golds and one silver. Additionally, I participated in swimming events at the World Transplant Games in 2009 held in Brisbane, Australia. I won three silvers and one bronze. Outside of the transplant games, I have accomplished other achievements, including open water swimming in 2010 - Escape from Alcatraz (1.2 mile) and the Beach2Battleship (2.4 mile). I also completed an Individual Triathlon in May 2011.

I train by myself at various local pool facilities.  Receiving back my identity as an athlete is one of the greatest gifts transplantation has given me.  My constant desire is to achieve greatness in transplant athletics, as well as accomplish goals that have never been done by heart transplant recipients.  I am motivated to train for the Games so I can have a platform to spread the message that transplantation works amazingly well, to inspire hope in others, and to honor God and my donor family.

What motivates you to compete in the Transplant Games?

I will swim to display the amazing success of transplantation, as well as declare the urgent need for organ donation in the United States, and worldwide.

What has your transplant allowed you to do with your life that you previously thought unlikely or impossible?

My life is a gift.  What I enjoy today, and am able to accomplish, is due to the willingness of my donor and his family to make a selfless decision in the midst of unspeakable grief.  There were no other options for me but dying.  Therefore, I live with confidence and gratitude every day, driven to make an impact in the lives of others.  What else is there?!

Not only have I been privileged to become an elite transplant athlete, I served two years as a chaplain at University of North Carolina - Chapel Hill Hospital, including twelve months in Cardiology.  How ironic that I became a member of the Heart Transplant Team, as a professional and not a patient.  I no longer suffer from panic attacks.  I play with my girls, and sometimes even have the energy to keep up with them.  I can take care of my wonderful wife, Caroline, who used to have to take care of me. Also, I work as an Associate Pastor at Grey Stone Church in Durham.  I also am a supporter and speaker for the Myocarditis Foundation.