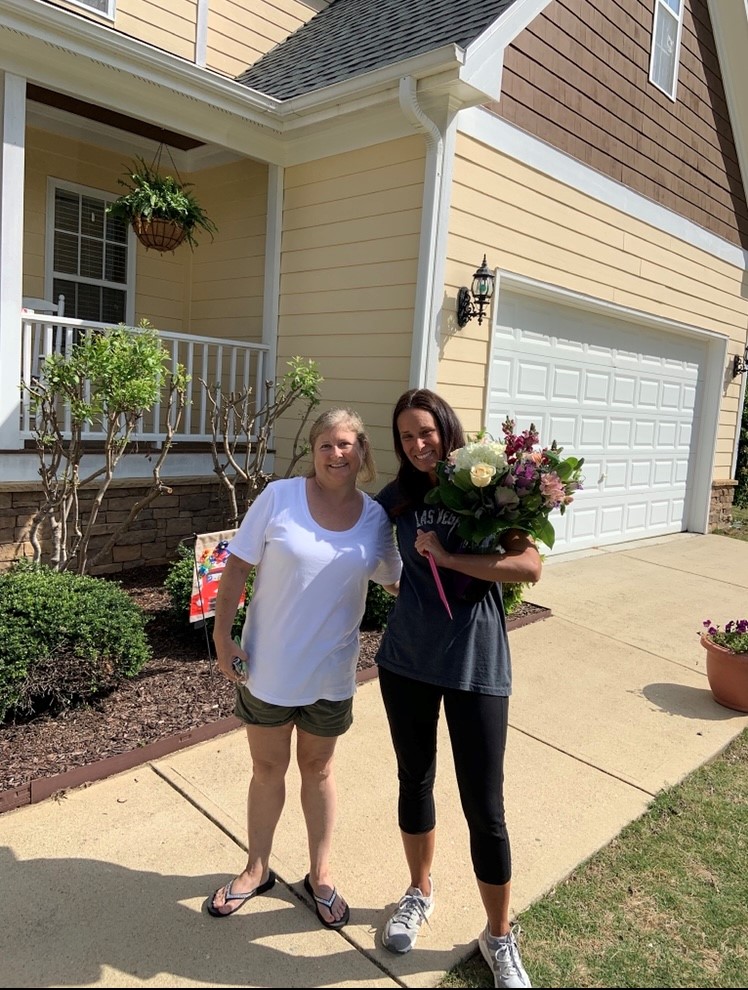 My name is Tracy Zeidler and I live in Wake Forest. Just over 3 years ago (May 17, 2019), I successfully donated my left kidney at UNC.

A year prior to donating, I was diagnosed with a vascular condition called Nutcracker Syndrome (NCS). NCS is described as a rare vein compression disorder that occurs when arteries, most often the abdominal aorta and superior mesenteric artery, squeeze the left renal vein. NCS causes excruciating pain and because of the lack of unawareness about the condition, it often goes misdiagnosed or undiagnosed. In fact, NCS is not that rare but again because of the lack of knowledge and awareness in the medical community, some patients go years without a diagnosis.  These patients are often viewed as drug seekers.

I was diagnosed with NCS in a local ER after having two CT scans and being seen by a urologist that chalked it up to muscle soreness. I was very fortunate to get diagnosed so quickly and even more fortunate to live in an area with Duke in my backyard.  After searching online for hours about the condition, I found a Facebook group of people all over the world that also have or suspect they have NCS. I joined the group and learned very quickly that there was a transplant surgeon at Duke that was familiar with the condition, Dr. Bradley Collins. Dr. Collins trained under Dr. Hans Sollinger, who would be considered the expert when it comes to NCS (see article link below).

During my initial appointment with Dr. Collins, he offered two solutions: nephrectomy or auto transplant (AT). Since the left kidney itself was not affected by the condition, it could either be transplanted to another part of my body or removed altogether.  At first, I elected to start the testing to prepare for the AT. As I prepared for the major surgery, I continued to read stories in the Facebook group and learned about another NCS patient that elected to have a nephrectomy and donate her kidney. Donating the kidney was never discussed with me by any physician. I then told Dr. Collins that I wanted to have a nephrectomy and donate the kidney once I had all the tests to show that the left kidney was functioning perfectly.

I started the process at Duke and after nearly three months of testing and meetings, I was denied due to the unknown of the underlying condition by others that were on the panel reviewing all cases. I was scheduled to have a nephrectomy and my healthy kidney would have been thrown away.

I could not allow a perfectly healthy kidney to go unused knowing how many people were on lists waiting for one. I went to UNC and started the process there.

The day of the testing and meetings at UNC, I left the hospital and went to Chapel Hill High School to see my daughter’s lacrosse game. She had just joined the team and I did not know any of the other parents. I sat near a couple, and they started talking to me, they recognized that my daughter was new to the team. During the conversation, I learned that the mother I was speaking to was on the list at UNC, waiting for a kidney. I ultimately donated my kidney to her.

If I had not been a part of a social media group, I would have not known that donating was an option. Since then, myself and a few others in the group have tried to raise awareness and more and more NCS patients have successfully donated.  I would love to see the medical community become more aware of this condition and offer donating as a treatment option!

Do you remember the day of your surgery? What was it like?

I do remember the day very clearly.  I was very excited.  My brother and daughter drove me to the hospital and my brother commented that he was surprised that I was not nervous.  I was excited to have the surgery so that I could feel better again.  As I was waiting in pre op, the story showed on the local news and all the nurses were like "that's you".  Amy, the recipient came back to talk and say that to you.  About then, the anesthesia started to kick in and I do not remember anything else.

How was your recovery? What did you learn through the process?

When I woke up from the surgery, I experienced a lot of pain in my lower back and naturally in my abdomen.  I stayed 2 nights in the hospital and highly recommend that to another considering donating.  It was very hard to sit up or move in general.  Overall, my recovery was quick and had no issues.  I attribute my speedy recovery to being in good shape.  Before surgery, I attended a bootcamp 3-4 times a week and pushed myself to complete the tough workouts.  I knew that being in shape would help with the recovery.  When I returned for my follow up the next week, the physicians and nurses were surprised that I was walking in and not in a wheelchair.

What would you like people considering living donation to know?

I read so many stories where people are disappointed after donating that they did not feel appreciated or have an opportunity to hear from the recipient.  Anyone considering donating should do it because they want to help someone and not get recognition.  Also, prepare yourself for poor outcomes.  My recipient had several complications, became very ill and was in the ICU for 7 weeks.  I felt awful and almost blamed myself.  Mentally, that was very challenging.

As I mentioned, my journey was a bit different than most that decide to donate.  I would say that if someone wants to donate, understand that each hospital is different and do not get discouraged if denied.  Don't give up and keep trying.