Through the Eyes of a Float Rider: Day Two of the 2014 Donate Life Rose Parade Experience 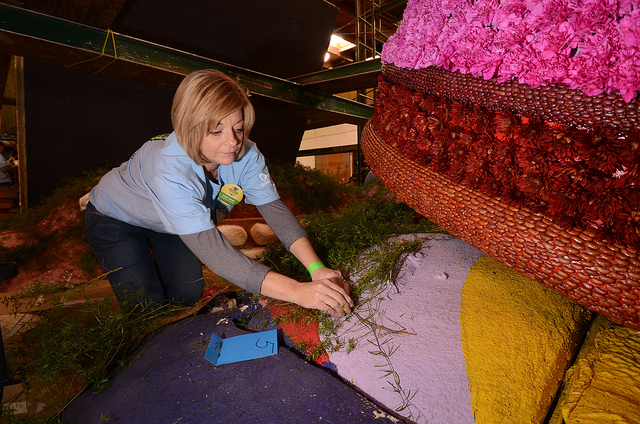 Day one was a whirlwind. By the time David and I got back to our room to settle down, we realized we just experienced a 22 hour day! So, after several hours of much needed sleep, we were up and at’em for day two. Today we would be going to the float barn again to help decorate the amazing vessel we had been introduced to last night.

A vessel is defined as an agent or vehicle for some purpose or quality. We, as a group of individuals all with some very personal connection to organ donation, decided that the “float” was not just a float but instead a vessel through which we would share our purpose, promoting organ and tissue donation, fill others with comfort and hope, and fill ourselves with what this experience had to offer each one of us.

At 8:00am, we arrived at the barn and were again warmly greeted. You could feel the excitement in the air and emotions were once again running high: there was much work to be done! Today was the day to begin placing live flowers and with 7, 700 dedicated roses to be placed on the bed alone, it seemed a bit overwhelming. After a brief orientation of expectations and the dos and don’ts, we were assigned our tasks.

Just to give you some perspective of what “the barn” was like:  not only did it hold our vessel but six or seven other floats as well. It was a very tight but incredibly active space filled with spectacular sights, sounds, and smells. Not only were the floats and decorating teams in the barn, but there was a constant flow of large groups of people, all lead by tour guides. They were there for organized tours of the day’s events. As they filed through many stopped to take pictures and ask questions. This was a perfect opportunity for us to educate others and “Light Up the World” with our stories.

I have to admit, I spent most of the day with tears in my eyes and joy in my heart, as I worked to pay tribute to, honor and support those who gave, those who have received and those who continue to wait. Others around us were equally as busy and emotional. So many jobs to be done: cutting, gluing, spraying, preparing and cleaning up. It takes teamwork and what a team we were!  The seven hours decorating were full of blood, sweat, and tears. Bloody fingers from the briars, sweat as a result of physical labor and mental dedication, and tears of joy and sadness.

We left the barn around 4:00pm in order shower and get dressed for the event of the night: the 2014 Donate Life Gala. We arrived to enter a “Light Up the World” themed room. Colored images of lanterns were projected on the walls, theme votive candles lit up the tables and everyone was in a very festive mood. We shared our day’s experiences over an elegant dinner, and each rider, walker and floragraph donor was honored individually. The experiences of the past were shared as well as visions for the future.

But, the most special event of the night was the never before heard, rewritten  A capella version of the “Light Up the World” theme song for 2014, “I See the Light” from the Disney movie “Tangled.” This was written and performed by a high school glee club from Burbank, California and they were awesome! (You can listen to the recording here: http://www.donatelifefloat.org/prod/components/docs/ISeeTheLight_JBHSVMA.mp3). After they performed the theme song, they continued to entertain us with some dance tunes, and in no time everyone was dancing, relaxing and truly enjoying each other and this experience.

Before the night ended an announcement was made that a local TV channel would be doing live segments for their morning news and 10 people were needed to participate. This would mean leaving the hotel at 4:00am tomorrow. The segments would be done at the barn and those participating would continue to work on the final touches of decorating. Anyone interested should sign up before leaving for the night. David looked at me with eyebrows raised and said: “4:00am? That means you would need to wake up around 3:00am. It’s almost 11:00pm now. What ya going to do?”

Stayed tuned!! Float judging will be the event of day three.