Through the Eyes of a Float Rider: Day Three of the 2014 Donate Life Rose Parade Experience 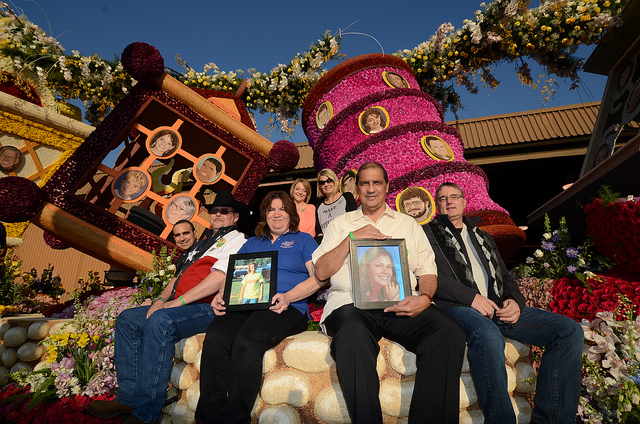 Well, wait for it…I got up at 3:00am on Tuesday!  Are you surprised??  I told David: “I will never, ever have this opportunity again, and I can sleep when I get home. I’m going!”  He was not surprised and was more than willing to accompany me on the early morning adventure.

So, at 4:00am we were in a taxi with about eight other people ready to go.  The environment at the barn was much more relaxed at that hour. Don’t get me wrong -  work on the Donate Life vessel and other floats continued, but today float judging would take place. The atmosphere was definitely different.

KTLA, a Los Angeles-based news station was at the barn to conduct live segments during its morning broadcasts.  We were on “stand-by” for each clip, available for interviews, or just for background scenes as the reporter, Allie McKay, spoke with Bryan Stewart from OneLegacy.  Allie was a very vibrant, to-the-point reporter who didn’t mind joking around a little. Watch us here: http://m.facebook.com/l.php?u=http%3A%2F%2Fsocial.newsinc.com%2Fmedia%2Fjson%2F69017%2F25484465%2FsingleVideoOG.html%3FvideoId%3D25484465%26type%3DVideoPlayer%252F16x9%23.UuCRiLTcXp4.facebook&h=zAQFGHpRs&s=1

After several hours of news, some IHOP breakfast, a little work on our vessel, lots of laughs, and helping EHarmony with its float, we were back to the hotel to take a very short nap, freshen up and change to head back to the barn.  This afternoon would begin with lunch and then the event of the day – float judding!  Over 600 people would be joining the riders and walkers for the official judging. Needless to say: we had  more than the average crowd!

The actual float judging is very serious and the emotions were high.  Spectators watched on, including our family members along with many of the floragraph donor family members.  The moment the float, or as we affectionately called it the vessel, comes out of the barn is a highly anticipated moment.  Will it fit? Will the front and rear lanterns lift as they should?  will they lower? Will all of the flowers stay in place and intact?  Will they wilt too much in the 75 degree sunshine?   Yes, it all happened as it should and the vessel was out for the world and the judges to see!

Now, what I had been waiting on for the last four months ( really the last 18 months) was going to happen. Stepping on the float and officially taking my seat as a Class of 2014 Donate Life Float Rider!!  What an honor! It’s my turn to Light Up the World!!  Tears fill my eyes again as I recall that moment and try to effectively convey the emotions.  So many things racing through my mind: how blessed I am to have been chosen as a participant in this groundbreaking study; to have received two successful islet cell transplants; to have regained my health (physical and mental); to have such a strong support system of family and friends; to have such friendly, compassionate and intelligent doctors and nurses to care for me; to have two very generous organ donors; and to have a God who loves me enough to bring me to this very special place in my life.

The time came, and we all take our places on and around the vessel to await the arrival of the judges. The atmosphere remained festive with a lot of chatter and even more photograph. However, we needed to maintain a certain level of respect for the other entries being judged and remained silent as the judges approached those entries closest to us.

There are some things about judging that everyone should know about:

I’m not sure how long the judging actually took, but it seemed like a lifetime as my mind raced. It was during this time that I realized how different the experience was going to be from this vantage point. The bell rang again, signaling the end of the judging. The music stopped and the crowd erupted with applause, cheering as they stood on their feet.  The judges had been friendly and complimentary; they seemed to be amazed at the response from the spectators. One of them raced around in front of the cheering crowd and took a bow!

We did it!!! It was dinner time and we gathered to eat, talk, and celebrate our accomplishments.  We walked down Colorado Boulevard to witness the New Year’s Eve celebration and to see those who were camping out for the fabulous parade that would take place early the next morning. It was a lively celebration, but 3:30 am comes early, so David and I celebrated the New Year on East Coast time and settled in for a few hours of sleep.

Register as a Donor