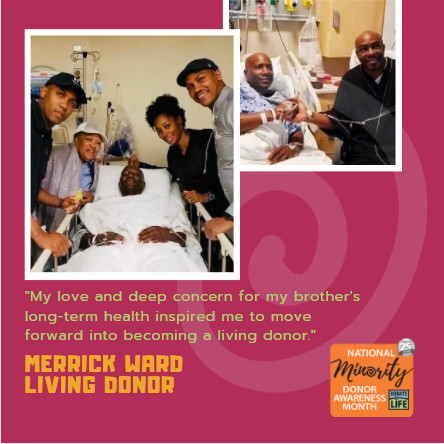 My name is Merrick Ward. I currently reside in Winston Salem NC. I've resided in the state of North Carolina for 11 years. I am a producer, cinematographer, and editor at GDavis Production & Films.

When I got the news that my brother, Melvin was placed on dialysis, and he informed me he needed a kidney donor, without thought I told him I would get tested. My love and deep concern for my brother's long-term health inspired me to move forward into becoming a living donor. I had six brothers who were raised in a single parent household. By no means was my brother perfect but he did what he could whenever he could to make sure my mother was ok, and his little brothers were looked after. When I was younger and bullied, my brother would always stop whatever he was doing and stand up for me. This was my chance to stand up for him. The day of my surgery I was a little apprehensive but happy that it was finally about to take place.

My recovery went faster than I thought, and I have never looked back since. For me there have been no down sides. I'm healthy, happy, and I gave my brother a better quality of life. As a consequence, it has given my life even more purpose. I feel if a spotlight was shown on all the success stories of those who have given and lived long healthy lives that others would come forward!

During National Minority Donor Awareness Month, consider signing up on the organ donor registry and share your decision with your family.