Faith Over Fear: Choose The Heart 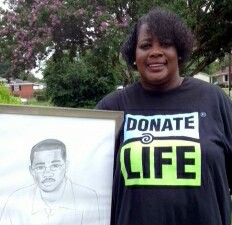 While enrolled in Driver’s Education at age 15, D Jay expressed a desire to become an organ donor. After a long, in-depth discussion  about what happens to the body after death, the resurrection of the body and the common mistrust of the medical system held by African-Americans, I asked him: “Are you sure you want to donate?” His response was still: “Yes.” He expounded: “When I die, I won’t need my organs any more. Give them to someone who can use them.”

At first, D Jay did not have the heart placed on his first license (paper registration), but when he renewed his driver’s license at age 21, he chose the heart. I was proud of D Jay because he had not changed his position. D Jay’s faith was an integral part of his life. He sang his first solo at age four and was baptized at age 12. His faith community had taught him that the physical body returns to dust and there will be a resurrection of the body when Christ returns. His faith did not allow fear to dictate his decision.

D Jay loved music, math, and computers. He was awarded a full academic scholarship to North Carolina State University’s School of Engineering. He majored in computer science and received a minor in math. He marched at his graduation in December 2007, which was one of the proudest days of my life.

In his book Jesus and the Disinherited, Howard Thurman talks about the fear that besets the vast poor, the economically and socially insecure, as a fear of a different breed. This fear contributes to one of the largest barriers for African-Americans to register as organ and tissue donors: a mistrust of the medical system. Refusing to have a heart placed on your driver’s license is a by-product of such fear. While there has been historical documentation of abuse suffered by disadvantaged and oppressed groups, in particular African-Americans, within the medical system, and while we are not living in ideal society, we must acknowledge the advancements that have taken place.

Organ donation is a blind system. People of different genders, races, ethnicities, and ages can give and receive the gift of life from another. Unfortunately, while minorities make up over half of North Carolina’s transplant waiting list, we represent just over 30% of those donating organs. We as a community can no longer allow fear to prevent us from registering as donors. While this post is intended to challenge the African-American community to allow your faith to override your fear, it is also a challenge to those educating about organ donation to our communities. We want to ensure they continue to listen to our concerns, questions, and ideas, and they release data to support the trustworthiness of organ and tissue donation, which can only help solidify the bridge we must cross going from fear to faith. Please follow D Jay’s example by overcoming your fear and choosing the heart.