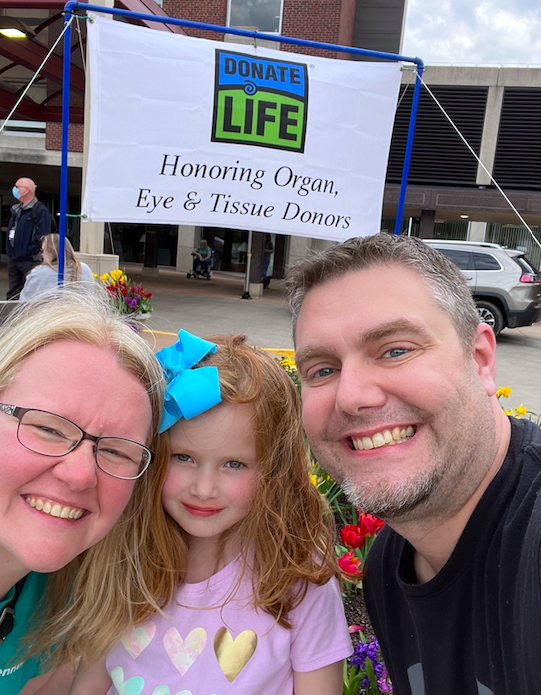 Ben is a native of Mocksville, NC and a graduate of Davie High School.  After high school he attended Pfeiffer University.  Ben has served as the office manager at Clemmons Presbyterian Church since August 2018 and lives in Mocksville with his wife, Ryanne, and daughter, Reagan.  They also have one dog, Rascal, who they rescued while on a mission trip to Cherokee, NC.

In 2008, following a colonoscopy Ben was diagnosed with ulcerative colitis, an inflammatory bowel disease (IBD) that causes inflammation and ulcers in your digestive tract. A few years later, in 2011 Ben continued to suffer health issues. Following an endoscopy procedure (ERCP) he was diagnosed with primary sclerosing cholangitis (PSC). PSC is a long-term progressive disease of the liver. The bile duct scarring which occurs in PSC narrows the ducts of the biliary tree and impedes the flow of bile to the intestines. Eventually, it can lead to cirrhosis of the liver and liver failure. PSC is a rare disease and most commonly affects people with IBD. Approximately 3–7.5% of people with ulcerative colitis have PSC.  There is no effective medical treatment for primary sclerosing cholangitis. The most definitive treatment for PSC is a liver transplant.

Unfortunately, there are not nearly enough liver organ donors to accommodate the number of people who need a liver plus Ben’s MELD score (a measure of how severe a patient's liver disease is) remained low, keeping him low on the transplant list.  During a routine visit with Ben’s hepatologist at UNC Hospital he was presented with a new idea.  His doctor suggested he consider a living donor transplant.  Ben and Ryanne had never even heard of a living donor transplant for the liver prior to this.  Unfortunately, UNC does not perform them.  After discussion with his doctor and much research he decided to apply for a living donor liver transplant at The University of Pittsburgh Medical Center (UPMC).

On March 29, 2021, Ben launched a Facebook page called “Ben Needs A Liver Donor” with a post containing more personal info than he’d ever shared openly – but he knew it was his best option for finding a donor.  On April 20 a stranger left a comment on the page stating that she wanted to be a donor and would be travelling to UPMC May 19 for testing.  On May 26 Sandi was approved as a donor for Ben.

Over the next few months, a complex route was mapped out as to how she even learned about Ben’s need.  The abbreviated version:  The associate pastor at Clemmons Presbyterian shared a prayer request email with the congregation, a church member then forwarded the email to a friend, the prayer request was then circulated through the non-profit ministry he was connected to in Statesville and eventually reached Sandi’s email inbox.  She said as soon as she read the email, she knew she needed to be a donor for Ben, Ryanne and Reagan.

Fundraisers, prayer services, calls, emails, and texts all lead up to Ben and his family travelling to Pittsburgh for the transplant surgery.  August 2, 2021. A normal day for most people.  For Ben it was a new beginning.  On that day Ben received the most selfless gift from a stranger – the gift of a portion of her liver for his liver transplant surgery.  One of the last comments Ben made to Ryanne before being wheeled back to the operating room on August 2 was how he thought he would be more nervous than he was. The truth is, Ben felt a peace he’d never experienced.  God had worked all things together to bring Sandi and Ben together and God would most certainly be with both during surgery and recovery.

Ben’s recovery was a little more extensive than planned. He bounced back and forth from the hospital to the hotel and then from a regular room to the Transplant ICU (3 different times in the TICU).  His final admission to the TICU was due to extensive pulmonary embolisms.  It was mentally, physically, and emotionally draining. There were uncertain days, but it seems like those were the days a stack of greeting cards would come in the mail at the hotel, or he’d receive extra text messages or messages on the Facebook page. Ben recalls “Even though we were 7 hours away in Pittsburgh we could feel the love and prayers being sent from everyone in North Carolina (and beyond via social media)”.

Ben would share one thing to someone preparing for a liver transplant (or any transplant), don’t think your story is going to be like someone else’s.  You may get frustrated that your recovery isn’t going like someone else’s you saw on Facebook or the person who had their surgery after yours was discharged while you remain in the hospital – but stay strong.  Transplant recipients are strong – but if you’re struggling reach out to someone.  Family support and even professional mental health assistance from a counselor or psychiatrist is the most important groundwork that needs to be laid before even thinking about a transplant.  Ben knows that without his faith, community of friends, family, Facebook strangers and even a counselor he would not have made it through the arduous process.

If you aren’t a registered donor, please consider it – whether it’s as a living donor or after your time on earth has finished – you can save someone’s life….and we only get one life.  Sandi is most certainly not a stranger now; she is a sister in Christ.  Ben and his family are forever grateful that Sandi listened to and answered God’s call to be a living donor.